The final of the twelve painted panels completed in the new year featuring a spotted pardalote in front of its muddy bank home and the silvereye in the wattle. Both photos referenced were taken by Chris Grounds. Today I joined the other Bherwerre wetland artists on a wetland walk guided by Plant specialist Rebecca and bird specialist/photographer Chris. It was lovely and inspiring.

I attended this 2-day Visual Arts industry conference held at the NGA and Parliament House.

The NAVA codes of practice will soon include a section on ARIs.

Kelli McCluskey’s interactive game developed by PVI collective was a brilliant and entertaining way to share ideas and the highlight for me.

On Sunday I completed the Rainbow Lorikeet I had created at Worrowing during my residency. The Lorikeet was found deceased by Alicia Talbot during my residency at Bundanon in 2015. Its shroud on paper is still waiting for a watercolour painting. At Worrowing I had a strong desire to paint on a sturdy linen stretcher with rich oil colours. I remembered a friend (my former primary school teacher) Bruce Malbon had requested a colourful bird, so I felt inspired. I began the ‘paint’-staking but enjoyable process of completing two coats of gesso in the negative space between the nest motif consisting of the raw linen glistening with rabbit-skin glue. I also left raw linen sections inside the Lorikeet too, which made the oil painting a little more challenging. I am very happy with the result. 68(w) x 64(h) cm.

During my PhD I created many ‘shrouds’ using an installation set up on a farm in the Monaro where Tony and his partner the sculptor Steven Holland live. The crested pigeon was found deceased on a road in Canberra and placed on a sprung bed-base to decompose. The eucalypt under which the canvas lay leached its rich brown bark juice on the right hand side while the mesh protecting the body from predators left a rusty imprint. Originally exhibited without further work undertaken as Alone (Spring Pigeon) 2011 in my graduate show, I was suddenly compelled to take the work to Hill End with me in 2016. It was there I added my most common motif, the nest using delek the sacred white ochre from Madjarlngarlkum in Western Arnhem Land. The nest is a cosy home offered to the bird and myself when away from home. I then painted in the post-decomposed body of the pigeon using bitumen and a touch of oils that speak to the bark stain. I lined the bird beaks up like a reflection, a conversation between two forms of representation; one created by the disintegrating subject another the painted signifier. I then located the work in Hill End by painting in an iconic structure found in the town using a very minimal technique in which the main body of the figure consists of the raw canvas ground sized with rabbit skin glue which sparkles under lights and seals the bodily fluids and debris to the surface.

Waking up seeing the colours of dawn from bed and painting. I had soaked a batch of rabbit skin glue and alum to size a bunch of new linen and canvas stretchers, one being the ringtail and magpie shroud created at hill End. I worked on Bherwerre 6 more too and thought of a work to paint for the Flourish theme Ravenswood Art Prize, although I only have two days left to create it, which may be impossible. Darren and I walked down to the dams and swamp on the property and found some clay colours suitable for the ochre expedition on Sunday. I was hoping to also find wattle glue but there were mainly casuarinas, eucalypts and paperbarks. 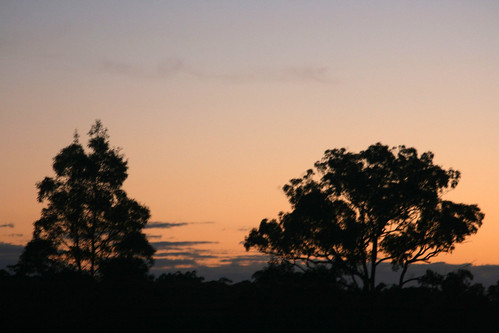 I moved into Worrowing today. A sun-filled studio apartment on a private estate run by Jenny, Adrian and one of their sons Tom who is also an artist. I focused on painting the 6th Mural. At 5pm I met Jennifer from Bundanon to hand over my artwork donation the diptych ‘Winter Stingray with Jennifer’s Skate (1) & (2)’

I have been staying in the musicians cottage at Bundanon with team Night Vision preparing for Alicia’s siteworks event during the last week and Suz showed me this wonderful wombat near the cottage.

I created another painting over a $2 shop photo canvas. It is a portrait of the 19th century Haefliger residence. I have never created a portrait of a house before. Hill End has made an impact.

Today I could see (and I had heard) another rain event was headed our way so I decided to deinstall the Hill End Shroud. The prints worked very well especially the ringtail. I strung up a line in the woodshed so it could hopefully dry out a bit before it is packed on Saturday for the early morning Sunday trip home. Yesterday I had been invited to brekky at Dan and Vik’s house (short for viking and he was building a model boat when I arrived!). Like all places in Hill End on lease it is a restored 19th century ruin and absolutely beautiful miniature spaces in multiple buildings with earthen walls and wooden panel ceilings that set off the colourful personal collections of art and antiques brilliantly. Today I had (great) coffee at Genevieve and Bill’s place (home of Hill End Press) which was equally breathtaking and had the additional embellishments born from their eclectic art practices and those collected from artist friends. It was a wonderful first visit (and back for dinner on Saturday!) hopefully the first of many. I then delivered my work to Dave, he was very happy and gave me a free coffee. 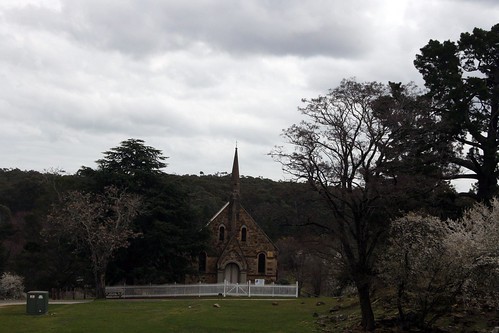 After 3 weeks of adjustment and cathartic emotions I have finally found peace in my solitude and the spring has brought wonderful warm days to Hill End. People are returning, more wonderful members of the community have introduced themselves and I have been painting like mad. I even made a painting for cafe Dave. I painted it over a 2 dollar shop photo print that makes it look like the kangaroo and bush in the Haefliger’s yard is in a vortex.